HOME > For investors > For shareholders and investors

For shareholders and investors

PIOLAX group has been strengthening its competitiveness in technology, quality , and price by introducing SBU (Strategic Business Unit) in FY2002, which encourages clarification of strategies and a consistent system of development, production, and sales of each business unit.


Approved by the Tokyo Stock Exchange, PIOLAX was listed on its first section on Sep. 1st, 2004. 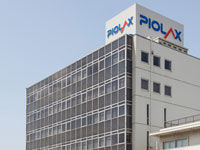 Regarding the automotive industry, one of the Group's most important markets, despite some recovery of production and sales particularly in China, we saw a production decline due to the lockdown and suspended operations in our major overseas markets such as the US and Europe. Similarly in Japan, a production and inventory adjustment led to a decrease in production, and as a result, the number of cars produced declined significantly compared to the previous year.


Under such market demand, the PIOLAX group securely provided for our business partners' needs. At the same time, we have been continuously promoting sales expansion efforts, particularly in Japan, North America and emerging countries. Nonetheless, mainly due to the negative effects of the reduced production caused by suspended operations of business partners and production cutbacks due to the spread of the COVID-19 pandemic, our net sales were 50,152 million yen, a decrease in profit of 12,327 million yen (19.7%) compared to the previous fiscal year.


Regarding the future economic outlook, while the Japanese government and Bank of Japan are expected to continue their economic policies and monetary easing, sluggish growth in consumer spending and a slowdown in capital investment have been observed. Moreover, as the effect of the COVID-19 pandemic lingers and the movement of people and goods as well as economic activity are restricted, production and sales continue to drop sharply, having a serious impact on the real economy. The market is expected to remain even more uncertain.


In the automotive industry, in addition to surging labor costs, supply issue of semiconductors and raw materials, and disruption of distribution systems, we believe that competition will become even more intense in emerging markets such as ASEAN with the rise of local automobile manufacturers.


In such circumstances, although the market still remains uncertain due to the impact of the COVID-19 pandemic, the PIOLAX Group will promote company-wide streamlining activities while promoting global sales expansion targeting domestic and overseas car manufacturers. As a result of this, we expect consolidated net sales of 58,000 million yen, an operating income of 5,400 million yen, an ordinary income of 6,200 million yen and a current net income attributable to owners of PIOLAX Inc. of 4,600 million yen.
It should be noted that the figures in this report were based on an exchange rate of $1 US=¥105.