“Royal Family Project” in Thailand and “Bonding” in Japan 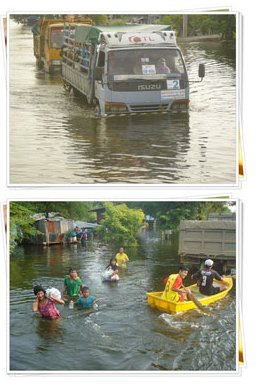 Daily, the seriousness of the flooding in Thailand which began in October last year deepens. Several industrial areas have been completely inundated; many Japanese companies have been flooded and have incurred extensive damages. Thankfully, PIOLAX (Thailand) Ltd. is located in the southeast hilly areas approximately 150 km from the center of Thailand where the flooding occurred; we were spared from the damages of the flooding that others have faced. While many have been affected by the flooding, support has been extended from all over the world. Of course, Japan has provided enormous sums of relief money, but behind that is a deep gratitude felt by Japan for the relief efforts provided by the people of Thailand in Japan’s time of need during the East Japan earthquake and disasters one year ago. It has been discussed on television and in the other media that funds have even been raised from the several hundred yen of income among the poor in Thailand as well.

PIOLAX has been fortunate in conducting business in Thailand. Thus, in gratitude, we also want to extend a hand to assist those who are suffering. To that end, we have requested our headquarters in Japan, and our Thailand branch to contribute relief money to the Royal Family Project to support victims of the disaster. The royal relief fund called the Royal Family Project supports the creation of a relief fund designed by the King to aid those who suffered damages and the poor. It has far more authority in Thailand than the Red Cross. The King has expressed that “those who contribute themselves will also benefit.” We believe that is very similar to what we say in Japan. “The good you do for others is good you do yourself.” The Kanji for 2011 was “bonding” and we really believe that this is the time for us to feel the compassion that truly bonds us together.